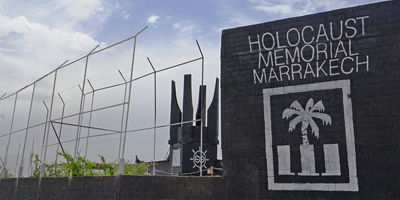 Dear Highness Mohammed VI, Art is not a crime. Our German organization for human rights & for the promotion of art & culture urgently has to complain to you about serious human rights violations in Morocco. It all started with a mobile soup kitchen for Africa, which your customs authorities in Tangier have confiscated since May 2018 because we are supposed to want to sell soups commercially in Marrakech. For a year now we have seen people eating from garbage cans and our soup kitchen would certainly have helped some people to get full. Why are your officials tearing down our artist garden? Your authorities did not respond to the building application in September 2018. Every day we tried to establish contact with your administration via all channels in the country from Parliament through your Moroccan embassies, which did not work. They never answered. In December 2018, our PixelHELPER development worker Tombia Braide died because he was so upset about the behavior of the authorities that he died of a heart attack. Of course, he was buried as a memorandum without anyone present and the blame was put on the Moroccan undertaker. We built a sundial in memory of him, it was destroyed by its bulldozers. We invested € 100.000 in Morocco within one year. Operated a canned bread bakery to ensure food stability in Africa and provided our village with free bread every day. Your gendarmerie takes visitors from us to the police station on the grounds that it is forbidden to visit us. An interrogation with allegations our guest would be a traitor and a Freemason is not to be tolerated. Then there were slaps in the face for our visitor. Journalists have been prevented from visiting our property by the police on several occasions. Although we have all the documents to get the investor visa in your country, including a 3 year lease with purchase option, your police want to deport us hard. We demand reparation for the destruction and rebuilding of the canned bread bakery. You should also inform your local police officers that artists are not terrorists. Because that's how we are treated. Our employees are physically threatened by the Mkadem, the Caid's left hand, not to close the holes in our outer walls. At the Sugar Festival, our team needed a rabies injection because of a dog bite. Unfortunately, their health department in Ait Ourir and Marrakech was closed. We demand 100.000 euros for the reconstruction and a personal apology from your police chief in Ait Ourir and the caid in Ait Faska. Who never speak to ourselves but only communicate with bystanders. Because of the police violence against our guest, we require 100 employees of our choice for 100 years from Ait Faska & Ait Ourir to work on our art projects.

In total there were 14 camps of various types with 4.000 men in the French protectorate of Morocco. A third were Jews of various nationalities. The inmates were all men except in Sidi Al Ayachi, which had women and children. Some camps were guarded prisons, ie real prisons for political opponents of the Vichy regime. Others were so-called transit camps for refugees. Still others were reserved for foreign workers. Or Jews in the Bou Arfa camp under Vichy, the Transsahara Railway became an important symbol for cooperation with the Third Reich. Therefore, there was a great need for workers. Those who could no longer work a lot dead.

Thousands of Spanish Republicans became responsible in groups of foreign workers for the construction and maintenance of the train tracks. The pace of work after fleeing Franco's repressions was brutal and inhuman. Spanish workers were turned into real convicts. Jews deported from Central Europe and French Communists were transferred there. The daily life there was awful. Many died of abuse, torture, illness, hunger or thirst, scorpion stings or snake bites.

The Berguent (Ain Beni Mathar) warehouse was operated by the Industrial Production Department. It was reserved exclusively for Jews (155 in July 1942 and then 400 in early 1943 according to the CRI report). “But that spiritual comfort didn't diminish the fact that Bergue camp was among the worst,” said Jamaa Baida. The Red Cross was asked to close, the Jews living in Bergued, especially from Central Europe, had previously fled to France. Foreign Legion volunteers demobilized after the 1940 defeat and then interned for “administrative reasons”. Such was the case of Saul Albert, a Turkish citizen who came to France in 1922. He was imprisoned in Bergua until his release in March 1943. In his diary he writes:

The guards, many of whom were Germans, behaved tyrannically, hostile, and malicious. "They should have joined the notorious NS-SS." Some prisoners escaped, reached Casablanca and joined forces.

In Boudnib, a small town of 10.000 inhabitants, the current military barracks are the last witnesses to the French army camp. Older residents keep memory fragments: “I can tell you two things for sure. The first is the Boudnib wing, which is mostly made up of Jews. The second is that most of the city's campers were educated in elementary school ”(Tel Quel Magazine No. 274, May 19-25, 2007).

Maurice Rue, a communist journalist, was interned there. He told us that "of 40 prisoners three quarters were Communists, Socialists and Gaullists before 40 Jews arrived for a few months."

After the American landing on the 8. November 1942 joined Morocco on the side of the Allies. In January 1943, the Allies met at a conference in Casablanca. A strategic and military agreement was signed. Shortly thereafter begins with the invasion of Sicily (Operation Husky, July 1943) the end of Europe occupied by Germany.

The construction in Bou Arfa was not interrupted and the conditions did not change significantly for the better. They were better paid than the Italian and German prisoners replaced the Communists and Jews. However, the construction of the Trans-Sahara remains an everyday hell. The project, which was designated as misappropriated, was abandoned by France only 1949.

Otherwise, the bearings were hastily dismantled between the end of 1942 and the beginning of 1943.

The documentary by Bill Cran and Karin Davison, aired on Arte, ent

A sign against persecuted minorities worldwide. The construction of the first Holocaust memorial in North Africa is intended to serve as a source of information about the Holocaust for schools and the population.

When each block is worth a thousand words. On July 17.07th, construction began on the first Holocaust memorial in North Africa. We set up steles to give visitors in the labyrinth of gray blocks the feeling of helplessness and fear of death that people had in concentration camps back then. We want to create a place in North Africa that brings remembrance into the digital age. The viewers are there with a live stream on the construction site and can influence the number of workers and blocks to be built with your donations. The more you watch and donate, the bigger the Holocaust memorial becomes.

The Founder of the PixelHELPER Foundation, Oliver Bienkowski, looked for his surname in the database of Yad Vashem and found some entries, then he looked where the next Holocaust Memorial is in Africa and found only one in South Africa. Since it is like half a world trip from Morocco, he decided to build a Holocaust memorial on the PixelHELPER site. The neighboring properties are all empty, so there is room to build at least 10.000 steles.