Do not ask what your country can do for you, say what you can do for Assange, the modification of John F. Kennedy's historical saying lights up at the US Embassy in Berlin. Americans who regularly commit war crimes, from defoliants in the Vietnam War that killed hundreds of thousands of victims to journalists murdered in the Iraq war, have to withdraw their extradition requests.

Make a note for the next day of the trial; 25.02. is the trial date for extradition to the United States.

And because the truth has been kept secret for so long and no government takes sides with Julian, the English will surely be handed over to the Americans. That is why this month we will start addressing US embassies abroad, the White House and other US buildings abroad with light protests and artistic disturbances.

Donate now to make this possible, whether 333 euros or 5 euros, small amounts help! Do something for the quality of tomorrow's information, based on which you should make decisions!

If it is a punishable offense to receive & distribute secret messages with public value, what else can the press report? The government decides what is classified and what is secret.

The abuse of power of the USA against #Assange is incredible: He is seriously ill in a maximum security prison, close to death. Whoever saves a scout saves freedom! Snowden also continues to sit in Moscow because all western countries fear the revenge of the Americans.

@Wikileaks has been the enemy of the US administration since 2010. We demand immediate release from #JulianAssange from his detention in London. The Queen must pardon him immediately & give political asylum.

Old campaigns for other political prisoners

The European arrest warrant should not be used to prosecute political opponents. The German judiciary has good reason not to extradite Carles Puigdemont to Spain. Criminal law is rediscovered as a means of domestic conflict and the persecution of political opponents in an ugly way. The German judiciary should not take sides in the political debate in Spain and not least, from painful historical experience of the criminalization of political opinion can not afford to help. If she nevertheless agrees to the extradition, legal recourse is open and the Catalan may ultimately appeal to the Federal Constitutional Court. At the latest there, the rights of the individual should be given priority over the power games in Spain.

→ In addition, the following politicians are threatened with imprisonment and are currently living in exile: 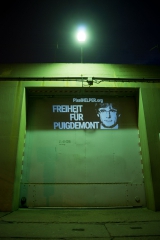 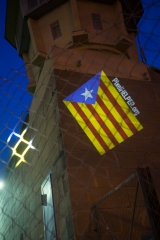 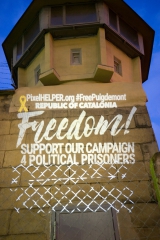 Take care of print & attention - support us now! As a donor you make an invaluable contribution to the excitement of public indignation - for a better world. Become concrete now and make a cross-border scandal possible. Nowhere do you get so much rebellion and uprising for every donated Euro as here. Please visit our website: PixelHELPER.org/ Donate or support our Facebook Fundraiser:

Freedom for #Puigdemont emblazoned on the Stasi prison in Berlin. We are protesting against the illegal detention of Catalan politicians in Spain. We are calling for the immediate release of all political prisoners in Spain. #PixelHELPER urges the federal government to declare immediately that Germany will by no means grant extradition politically. Such a political approval of the Spanish request for judicial assistance is required by the rules of the Law on International Mutual Assistance - regardless of the court's legal decision. In view of the importance of the case, the granting authority is the Federal Government in the form of Minister of Justice Katarina Barley. We call on the federal government to ensure immediate release of Carles Puigdemont on German imprisonment!

Take care of print & attention - support us now! As a donor you make an invaluable contribution to the excitement of public indignation - for a better world. Become concrete now and make a cross-border scandal possible. Nowhere do you get so much rebellion and uprising for every donated Euro as here. Please visit our website: PixelHELPER.org/ Donate or support our Facebook Fundraiser: https://www.facebook.com/donate/1972507843071293

The Arab Spring was to bring the breakthrough and start a new epoch of democracy. But the rebels of those days are now political prisoners. The people who have risked their own lives in states that are black on the press freedom scale of Amnesty International are in jail today and are forgotten by the world. PixelHELPER wants to intervene here and liberate the political prisoners.

Our first action is to bring back to light 13 people in prison since March 2011. The Bahrain 13 were arrested after the February 2011 uprising in Manana, Bahrain, on charges of conspiracy against the government. Many states and organizations, including Amnesty International and Human Rights Watch, continue to point to torture. The prisoners were visibly tormented.

The worries also do not stop for the families. These political prisoners are still in prison today, serving 5 sentences ranging from life sentences to multiple life sentences. Everyone has the right to express their opinion. Let us not forget good people who sacrificed their own freedom to bring democracy and peace to many.