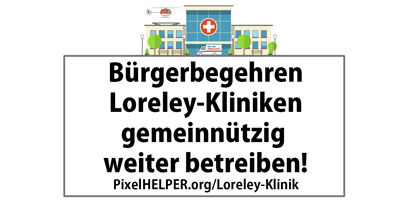 The following is a prime example of the fight against direct democracy through a referendum. Instead of examining our operator concept, politicians are rushing against our citizens' request on all channels, which shows us that we are on the right track. As long as no administrative court decides, our citizens' petition is not inadmissible under §17 of the municipal code. Today, even the Official Journal is misused for mood-building. We are now requesting a counter notification.

The politicians who want to close the Loreley Hospital work with defamation methods that are otherwise only used in totalitarian countries. The association of towns and municipalities rises to the court and their opinion is presented to the citizens like a judgment of an administrative court. Some citizens have called for donations at the demonstrations of the old citizens' initiative “For the preservation of the Loreley clinics”, individual companies have donated over € 10.000 to the hospital support association. We received € 0 in donations and our petition for citizens is criticized because we are following the recommendations of Mehr Demokratie e. V. have written our donation account number on the sheet.

The last chance to save the Loreley Clinic is a citizens' request in each of the 3 partner cities. Anyone who has their first residence in the respective city and is over 18 years old can sign. Please distribute the documents extensively in your area.
Scroll down to choose between Oberwesel, St. Goar & the Hunsrück-Mittelrhein Association.

Citizens' request for the city of Oberwesel

Citizens' request for the city of Sankt Goar

Citizens' petition for the Hunsrück-Mittelrhein community 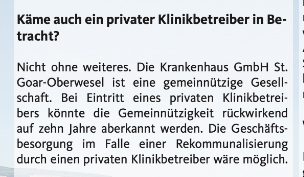 In the current compass April 2020 of the CDU Oberwesel something wrong is claimed, namely that the clinic would be non-profit.
The Krankenhaus GmbH St. Goar-Oberwesel, as the name suggests, is a GmbH and not a non-profit GmbH. It is only exempt from some taxes but not charitable. In summary, it should be noted that an exemption from business tax, the
Sales tax and property tax is granted to all hospitals that meet the requirements of § 67 AO. This is regardless of whether the hospital is nonprofit. An exemption from corporation tax is only granted to hospitals that are non-profit within the meaning of §§ 51-68 AO. At the moment it is a GmbH including all possibilities to withdraw money. Departments were closed and hospital technology diverted to other hospitals. A conversion into a non-profit GmbH can be achieved. Help with the citizens' request to continue the non-profit operation of the clinics facebook.com/loreley-klinik With a non-profit limited liability company, much more funding is available than with the limited liability company structure, no profits can flow anymore, but must be used for the non-profit purposes of the new non-profit hospital. In our case that would be the clinic itself, the senior center and the new workshop for disabled people in the old location in Sankt Goar. For more information, just scroll down on this page.

We start three petitions in the cities of the shareholders in order to achieve a new "extraordinary shareholders' meeting" requests the Marienhaus Holding GmbH to transfer your 55% shares in the hospital to the PixelHELPER Foundation non-profit GmbH, just as you had offered to the Red Cross.

In addition, the hospital is to be converted into a non-profit company in order to keep all profits in the company in the future and not to make distributions to shareholders. To do this, we have to collect approx. 300 signatures from voters per partner at the location.

The PixelHELPER Foundation non-profit GmbH developed a concept and offer for the maintenance and continuation of the clinic in Oberwesel. Offers with a special focus on inclusion are to be created at the Sankt Goar location. This includes new forms of living for 8-16 people, as well as an affiliated workshop for people with disabilities.

The hospital in Oberwesel should also reactivate all required specialist departments such as the intensive care unit in order to operate as a full-fledged hospital.

In cooperation and cooperation with the University of Marburg and nearby medical technology companies, the workshop for the disabled will produce relevant and certified wooden medical components that will be used for export to Africa.

For the construction of a new workshop for the disabled, including barrier-free living, funding of up to EUR 600.000 should be applied for from Aktion Mensch.

The PixelHELPER Foundation wants to demonstrate impressively how the requirements of an aging society can be met in a modern and future-oriented way in the country.
In order to ensure financial security, the PixelHELPER Foundation will concentrate on opening up new profit areas in order to ensure the continuation as a non-profit hospital. We also expect the funding from the hospital structure fund to continue operating the clinic and expand.

Here, the Pixelhelper Foundation, through its supporters, can fall back on a well-known network in German health policy.

Since a non-profit limited liability company does not pursue its own profit interests, no profit distributions are made to shareholders, we invest any surplus in the clinic and the handicapped workshop.

The focus of a non-profit hospital is always on the common good - synonymous with the well-being of the individual patient. The term "non-profit" is relevant for tax law, because only the activities listed in paragraph 52 of the tax code that serve the general public are deemed to be non-profit in the tax law sense - for example, it concerns funding in the health sector. The non-profit GmbH (gGmbH) is exempt from corporate tax . In return, the gGmbH is obliged to use the funds generated only for non-profit purposes.

So we want to become a non-profit specialist clinic - and act accordingly. This allows us flexibility, which in turn benefits the patient. Because we then not only work in a highly competent manner in compliance with the latest standards, but also according to humane, qualitative and economic principles - this means that we want to use all of our financial and human resources for the benefit of our patients.
Background: The PixelHELPER Foundation was founded by several Freemasons and the light artist Oliver Bienkowski. In Hamburg there is the Masonic Hospital in Rissen, which is operated by the Red Cross, as well as the Masonic Retirement Home in the middle of Hamburg. The Freemason Hospital in Hamburg opened its doors on October 3, 1795 on Dammtorwall as the first institute for the admission of sick people, which was previously completely lacking in Hamburg. It was initially set up as a hospital for female servants and was expanded a few years later for male servants. When the PixelHELPER Foundation was dissolved, the assets went to the Freimaurer Hilfswerk eV, which was part of the charitable organization

Current situation 16.04.2020/12/00 XNUMX:XNUMX
We are currently looking for a rental property in downtown Oberwesel. We will use the location to coordinate 3 petitions for the maintenance of the hospital and to produce canned bread for refugee camps and the homeless. As soon as the location is found, the signature lists for all 3 cities can be downloaded on this page. After collecting the signatures, you can hand in the petition lists to us on site. The referendum will start before May 01st, 2020

Current situation 14.04.2020/12/00 XNUMX:XNUMX
We see in the failure to mention our purchase offer by Marienhaus Holding a clear deception of the other shareholders. The PixelHELPER Foundation non-profit GmbH has contacted an administrative law attorney in Koblenz & the association Mehr Demokratie eV to examine a referendum to start an “Extraordinary shareholders' meeting to repeal the resolution of April 09.04.2020th, 1”. The submission for the referendum is ready, but has to be checked legally. The referendum would oblige the city administration to make a decision at the extraordinary shareholders' meeting. A corporate law attorney examines competitive legal steps. With an extraordinary shareholders' meeting, the shares could be assigned to the PixelHELPER Foundation gGmbH, and the further XNUMX house operation in Oberwesel continued, as well as the preservation of the senior citizen center.

Although we sent our takeover offer to the company spokesman for Marienhaus Holding twice by email, there was no response to our offer except for a telephone call back from Heribert Frieling.

The Loreley Hospital & the Senior Citizens' Center is a public facility of major importance for Oberwesel. At the last shareholders' meeting on April 09.04.2020th, XNUMX, Marienhaus GmbH did not react to this, although there was a takeover offer from the PixelHELPER Foundation non-profit GmbH, and all inquiries about this, no further takeover offers were available. We see the criminal offense of fraudulent misrepresentation. Marienhaus moves inventory to other hospitals, and in the end wants to secure the senior center as a cash cow. Self-employed who do something like this in Germany are considered bankruptcy offenses. Anyone who moves inventory, i.e. assets of the hospital, before an impending bankruptcy is liable to prosecution. The hospital was cannibalized by Marienhaus GmbH in the direction of other clinics such as Bingen. We urge all shareholders to ask Marienhaus GmbH out of the St. Goar Oberwesel GmbH hospital company. As a non-profit company, the PixelHELPER Foundation will not make any distributions of profits but will lead the senior center & hospital into the future for charitable reasons.

Donation receipts will be sent immediately. Your transfer receipt is sufficient for a donation receipt for the tax office up to € 250.

With a light projection on that Federal Ministry of Healtht the PixelHELPER Foundation turns into the closure of the St. Goar / Oberwesel. Our suggestion: The non-profit GmbH PixelHELPER Foundation takes over the 55% share if the Rhineland Palatinate Ministry of Health from the hospital structural fund, which are already earmarked for severance payments, for employee salaries, the continued operation and expansion of the hospital, which would give PixelHELPER the chance to renovate the clinic and keep all employees in the Oberwesel hospital for over 1 year. The house in St. Goar is to be used to build ventilation machines for the third world. The University of Marburg will soon be presenting simple ventilation devices for Africa to the public. With wooden material and simple parts from the hardware store, ventilators can also be built for countries that do not currently have a functioning hospital system. Furthermore, the PixelHELPER Foundation with an action office in St. Hospital Goar set up other non-profit aid offers such as a canned bread bakery for more food stability, organize a light art festival & take further steps to support the citizens of St. Goar & Oberwesel. The next pandemic is coming, before the Cold War there were over 40 auxiliary hospitals in Germany, which were closed due to savings. In times of a pandemic, we cannot close more hospitals. Jens Spahn's answer followed by email, referring to the Ministry of Health in Rhineland-Palatinate. Politicians must act quickly now. The 22. Millions of subsidies have to be released for the continued operation and salaries of the hospital and with a new non-profit operating company an attempt must be made to at least bring the hospital to the black zero in the next few years, because in contrast to Marienhaus GmbH, a non-profit GmbH does not have to make a profit. That would be a great way to at least reopen the hospital in Oberwesel for normal hospital operations. We appeal to the RLP Ministry of Health to release the funds from the structural funds, to transfer the shares to the PixelHELPER Foundation to Marienhaus GmbH and to save the employees from the Oberwesel Hospital. So that we can operate the hospital and retirement home side by side in the future for better basic care. The government of Rhineland-Palatinate is also obliged to operate a hospital in Oberwesel with a view to the tourists who are visiting the Middle Rhine, we hope that politicians will give in. The purchase offer by email to the company spokesman Frieling of Marienhaus GmbH has not yet been responded to. But we assume that just like the German Red Cross, who was offered the handover of the 55% stake, Marienhaus GmbH is also willing to offer us the 55% stake for one euro.

Citizens' petition to save the Loreley Clinic by proxy August 13th, 2020Oliver Bienkowski