We help others who are in need. We don't want to be taken too seriously, but our opponents have to take us seriously. So if you ever have a problem and don't know what to do, look for the PixelHELPER! ”.

PixelHELPER is here: Federal Chancellery.5 days ago
Angela Merkel calls for the release of Selahattin Demirtas
Federal Chancellery
For a new one # Türkei with a true democracy. #Angela Merkel turns on & requested by #Erdogan the release of the opposition leader #SelahattinDemirtas #HDP who is held hostage in Turkey. Support that @JailedLike Project on https://PixelHELPER.org/FreeDemirtas
For his commitment, the Buntesregierung awards the Buntesverdienstkreuz on ribbon to Oliver Bienkowski, the founder of #PixelHELPER. For building a #Holocaust Merkel also criticized the Foreign Office at a memorial in Morocco. "#HeikoMaas has not responded to the NGO's calls for help from Morocco, he has to face the consequences and resign. I organized a position for him at TRIGEMA "

PixelHELPER updated his / her profile picture.1 week ago
"We as Germans know what happens in the early stages of a dictatorship. The similarities between the early Nazi regime and Erdogan's Turkey right now are frightening," Oliver Bienkowski, a member of the group, told The Independent.

PixelHELPER has thought about the following: Political prisoners - here: TC Berlin Büyükelçiliği / Turkish Embassy Berlin.1 week ago
TC Berlin Büyükelçiliği / Turkish Embassy Berlin
PixelHELPER founder Oliver Bienkowski wishes for his birthday Heiko Maas who can be locked up in a mobile prison cell in front of the Turkish embassy in solidarity for the release of #FreeDemirtas to protest. All over the world authors are threatened, arrested or murdered. Anyone can be locked up in our mobile prison cell to fight for freedom and solidarity for political prisoners. We will be livestreaming the cell in front of an embassy at a different location every day. At the same time we are building a permanent cell in our PixelHELPER headquarters to permanently fight for political prisoners. Anyone can be locked up, either in a mobile car or at our headquarters.
Everyone can demonstrate in their own way.
Our first prisoners for our campaigns are:
#FreeDemirtas Politician, imprisoned in Turkey
#FreeAssange Journalist, imprisoned in the UK
# FreeNedimTürent Kurdish journalist, imprisoned in Turkey
#FreeShakthikaSathkumara Writer, imprisoned in Sri Lanka
Milestone 1: € 10.000 We are building the permanent prison cell
Milestone 2: € 20.000 We buy a flatbed car and start building it
Milestone 3: 20.001-25.000 € We build the plexiglass structure on the bed
Milestone 4: € 25.001 We begin installing the prison equipment in the car
Milestone 5: € 30.000 We drive around and start demonstrations in front of embassies in Germany
Milestone 6: € 35.000 We are expanding the car with a 26.000 lumen projector on the top to illuminate our demonstrations in the evening hours
Please distribute this link to promote the fundraising. Many Thanks!
https://www.facebook.com/donate/181339833423073/
9 View on Facebook

PixelHELPER is in Dubai.2 weeks ago
Photos from PixelHELPER's post
Dubai
To all influencers and people who praise Dubai so high, you're ashamed. The ruler's daughter, Latifa bint Muhammad Al Maktum, is being held captive in a villa. Before that, she was drugged by a special squad on the coast of India while attempting to escape. We call on the federal government to appoint the ambassador from Dubai and to protest formally.

To all influencers and people who praise Dubai so high, you’re ashamed. The ruler's daughter, Latifa bint Muhammad Al Maktum, is being held prisoner in a villa. We call on the federal government to appoint the ambassador from Dubai and to protest formally.

PixelHELPER1 month ago
Today is the 76th anniversary of the liberation of Auschwitz. Let us never forget the horrific crimes committed there. Let us build holocaust memorials in countries who still suppress or kill minorities like china & morocco. Stay loudly against any form of anti-semitism, racism and other types of discrimination in our world. #NeverAgain #WeRemember PS: @PixelHELPER
wanted to build first in the #Western Sahara to point out the bad situation of the #Polisario but we did not get a visa from #Algeria Read how we Fool the moroccan state. Upside down to hell. Preorder our book PixelHELPER.org/HELP

PixelHELPER
Liberty, when it begins to take root, is a plant of rapid growth. PixelHELPER fight 4 human rights & artistic freedom. The kings & tyrants who do wrong today will be gone tomorrow. #Liberty #Equality #Fraternity
Support our important work with a donation PixelHELPER.org/HELP In Morocco, the PixelHELPER 2018 started a major project. In a small town near Marrakech, a memorial, reminiscent of the Holocaust memorial in Berlin, was to be erected, dedicated to both the Moroccan Jews and the other forced laborers in the labor camps set up by France in Morocco. At the same time, a large part of the project was dedicated to the Uyghurs, a minority in China, hundreds of whom are in re-education camps and whose cultural heritage is being systematically destroyed by the Chinese government. For Bienkowski and his "PixelHELPER" this is the largest project to date and the most expensive at around 100.000 euros. Bienkowski earns his living with a busy agency and invests most of the profits in his political art projects. In Morocco, several goals were to be combined, creating a place of reminder and remembrance for Moroccan Jews as well as for Muslim Uyghurs, combined with social projects such as a large soup kitchen and a bakery. Bienkowski: “We want to use art to draw attention to important social issues. We also run development aid projects in Africa. In-house canned bread bakeries produce long-life canned bread to increase food stability for refugee camps, conflict regions and natural disasters. In this way we are increasing the stability of food in Africa. In the area of ​​emergency aid, PixelHELPER is trying to open small mobile container hospitals in addition to the canned bread factories in Africa, which are located near the UNHCR refugee camps ... “Because the Moroccan Holocaust story never shows the forced laborers in the French camps in the desert mentioned, in which Jews also died, Bienkowski wanted to fill this gap in history.

No help from the Foreign Office

Unfortunately, Morocco does not know such forms of action art. After the letters and applications had never been responded to before, so the authorities watched what happened, it came to a brutal end. The entire project, the bakery and the memorials were destroyed in March 2020. The Moroccan state sent bulldozers that crushed everything.
Bienkowski turned to the Federal Government and especially the Foreign Office for help. After all, politicians like Heiko Maas like to use terms in solemn speeches
like "worldwide human rights, culture of remembrance and solidarity" on the lips. But for the German Embassy it was a “private matter, not a project of remembrance and emergency aid worthy of support. Bienkowski protested in letters to the Foreign Office. It says:
"Today on March 15.03.2020th, XNUMX we will be deported by the police, that is an embarrassment for your diplomats in the Foreign Office.
The Foreign Office considers the destruction of the European canned bread bakery & art events such as the Uyghur memorial near Marrakech by German artists in Morocco to be a matter under private law? The Foreign Office only functions as a message transmitter instead of advocating for German artists, although we even worked with the Goethe Institute in Morocco. Our Moroccan lawyer tries everything to prevent our deportation, we never expected diplomatic help from you from Germany anyway. "
The embassy had only expressed concern that Bienkowski would leave Morocco on time. Ultimately, Bienkowski and his colleagues were actually deported to Germany and banned from entering the country. They continue their actions unabated. Maas and other self-satisfied politicians, diplomats, armaments managers and corrupt kings must continue to expect disruptive action art. For Bienkowski, "Art is therefore not a mirror that you hold up to reality, but a hammer with which you shape it."

Under the heading "Only those who think differently change the world", the pixel helpers refer to known grievances in the world. The mere exchange of the locations encourages reflection, as these three examples show:

“But our anger is understandable when you consider what we have suffered. What did our grandparents have to pick tea for the bigwigs in Ceylon?
What have our parents toiled in the cotton fields for the Indians, and the poor Saxons in the copper and coltan mines near Dresden, just so that the Congolese have 30 electrical appliances per household.
And the cocoa and coffee plantations in the Palatinate! Generations of people from the Palatinate have ruined their health for these gross African corporations. And the Somali fishing fleets that fished our North Sea empty, so now many East Frisians had to become pirates ... "

More information about the PixelHELPER at PixelHELPER.org
4 View on Facebook

🌈🌿PixelHELPER 🆘🇪🇺 @PixelHELPER
5 days ago
For a new one # Türkei with a true democracy. #Angela Merkel turns on & requested by #Erdogan the release of the opposition leader #SelahattinDemirtas #HDP who is held hostage in Turkey. Support that @JailedLike Project👉 https://t.co/ckXIRUezoa https://t.co/d5Vsdmhcjx
View on Twitter
9
20

🌈🌿PixelHELPER 🆘🇪🇺 @PixelHELPER
6 days ago
Donald Trump all along had evidence that the Crown Prince of Saudi Arabia approved the murder of #Kashoggi. All residents in #SaudiArabia should be given asylum in 🇺🇸. The ruling family can stay in the desert alone #MBS https://t.co/uPjSJz4h2H #Kashoggi #Thankskilling #Turkey https://t.co/k7AXzJFCE7
View on Twitter 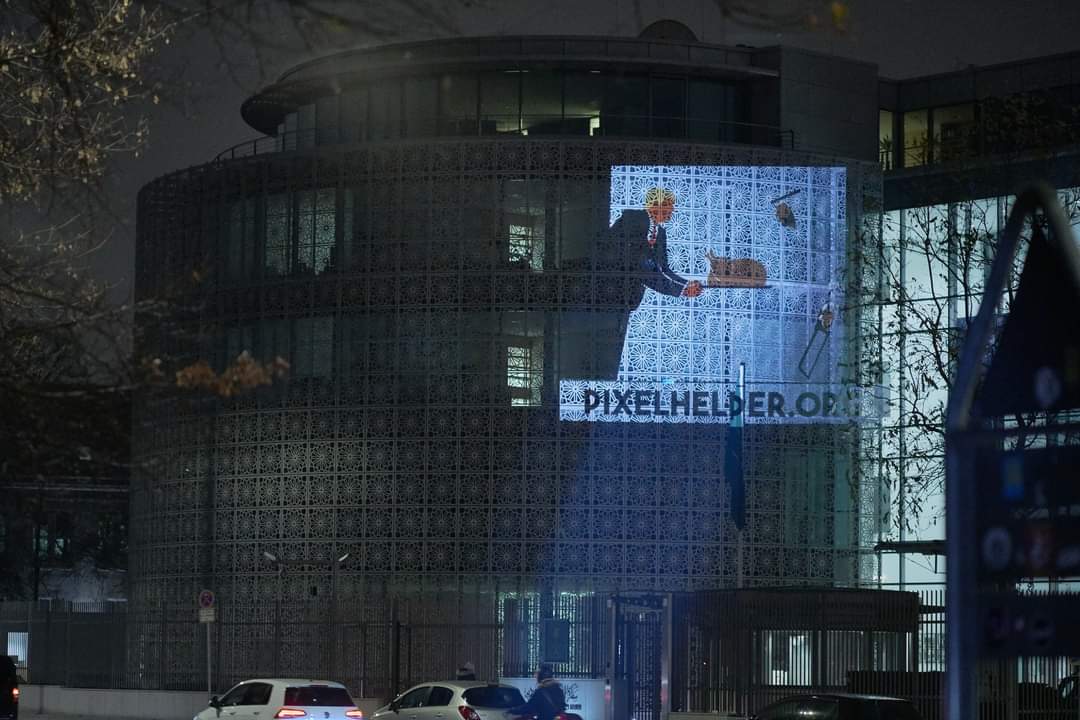 🌈🌿PixelHELPER 🆘🇪🇺 @PixelHELPER
2 weeks ago
In which public square in France can we set up our popup museum for freedom of art? On a weekend we want to inform visitors about the history of religious satire #SamuelPaty has his memorial in the middle. Lets walk together 7 times around
https://t.co/kpWIypMWfp #JeSuisCharlie https://t.co/gb0PCq7TEz
View on Twitter
0
0