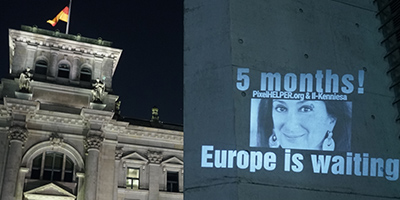 #PixelHELPER praises € 100,000 for information leading to the arrest of the backers of the murderers of Daphne Caruana Galizia. Please support our campaign at pixelhelper.org/en/donate

“Manifesto written with the blood of others” – that’s what American historian Mike Davis called the car bomb. The latest of these manifestos consisted of Semtex, also called plastic explosives, attached to the floor of a white Peugeot 108 in a driveway in Bidnija, 309 inhabitants, eleven kilometers west of Malta’s capital Valletta.

On October 16, Daphne Caruana Galizia, 53 years old, is behind the wheel of her car. She drives the gravel road to the main road, turns left, down the hill from where the distant glimmer of the sea can be seen, past a small, wild landfill and a zucchini field, 270 yards, to a red-rimmed sign, on which a hedgehog asks the driver not to flatten his equals. The explosion, the investigators believe, is triggered by mobile phone. At 15.04 clock the remains of the Peugeots are 100 meters further on a field, right next to the road. The seven Dutch forensic scientists who inspect Galizia’s body three days later in Valletta’s Mater-Dei hospital do not get much to see. There is little left of the body of the country’s best known and most ambiguous journalist. She had posted her last words on her blog 29 minutes before her death: “No matter where you look, there are crooks everywhere. It is to despair.”

A week later, the three sons of Galicia are in the European Parliament in Strasbourg, debating what the murder of their mother says about Malta and possibly about the EU. The Green MP Sven Giegold takes the microphone. “Daphne was killed in the street. There was no hiding place, their killers did not even try to make the attack look like an accident. On the contrary, this was a brutal demonstration of power, “he says. It was clear why the bomb was not under the police chief or attorney general’s car: “It was Daphne who shed light on the system of money laundering and corruption in Malta – it was not these authorities.”

While the commemoration is taking place in Strasbourg, Rosy Bindi, head of the Italian Anti-Mafia Commission, enters the Excelsior Hotel on the ramparts of Valletta. For days, the Commission was on Malta, the visit was planned for a long time, but now, after the assassination of the blogger, the interest is huge. Surrounded by smooth-set bodyguards, whose suits screw transparent cables into their earcups, Bindi sits down at a table and looks at the journalists, who have been waiting for them in heavy leather armchairs. The mafia, says Bindi, sees Malta as “a little paradise”. And “financial service providers who could offer to open businesses in Malta” are also “part of the problem”.

For Malta, Bindi’s statements are a problem. She has been an expert on the Italian mafia for decades, so her word has weight. Malta has been fighting for its reputation since the assassination of Galicia.

The murder of her, as many see it on the island, was a manifesto that those who are serious about the fight against crime are no longer sure about Malta.

Giegold, who has been involved in tax evasion for decades and knows Galizia’s research, is calling for international investigators to be sent. He calls for the resignation of Socialist Prime Minister Joseph Muscat and ensures that the European Parliament wants to send a delegation to Malta to “restore the rule of law”. 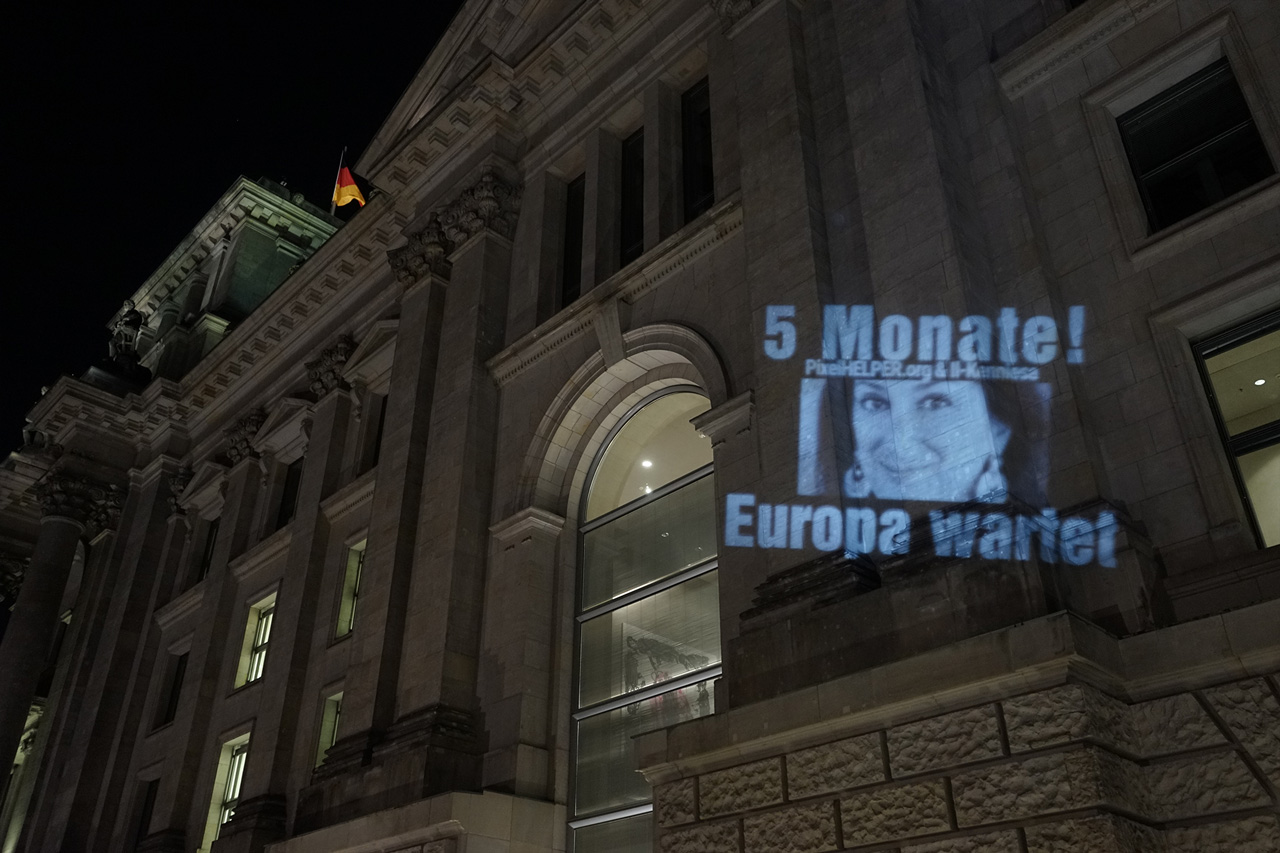 Five car bombs in two years
She is not the only one who sees it that way. If these days are reported on the island state, then black money is talked of letterbox companies, tax havens, a dark connection Azerbaijan, oil smuggling, pass sales and online gambling. Galizia’s greatest history has also contributed to this. Her son Mathew works at the research network IJIC, which unveiled the 2016 Panama Papers. About him Galizia received the documents concerning Malta. She discovered that Keith Schembri, cabinet chief of Prime Minister Muscat, and his colleague Konrad Mizzi – first energy, now tourism minister – maintained cover companies in the British Virgin Islands and Panama. All of this is now merging into a bleak picture, in which the boundaries between dubious private businesses of politicians, disputed public revenue streams and organized crime seem to dissolve.

It is a picture that mismatches the suburbs of Valletta, full of businessmen and tanned students, with the car-free, sand-colored old town that will become Europe’s cultural capital in nine weeks – an unmatched open-air medieval museum through which every day Tens of thousands of tourists follow the guides with their colorful pennants like crusaders of their standard, then in the evenings, in St. Julian, on the other side of the bay, satisfied with the spray, hare in red wine and tipping pint-like Cisk camp.

Some of them then watch over Jonathan Ferris. On the eighth day after Galizia’s death, he sits with thin glasses in a blue suit in the lobby of the Westin Dragonara. Behind the glass facade, the waves hit the rocks, on the sofas sit well-heeled families in sailor’s dress. Ferris is the security chief of the five-star hotel, and this suggests that things are not going the way they should in Malta.

Because until a year ago was Ferris police officer, responsible for money laundering. Galizia’s blog, he says, has always helped him with investigations. “She knew things we did not know. People trust journalists more like police officers. “Ferris educated colleagues in Brussels, China, Germany, he transferred Gaddaffi’s accountant, in November 2016, he moves as a department head to the Maltese Anti-Money Laundering Authority (FIAU). Between March 2016 and July 2017, the four reports on suspected corruption against government officials has written. All, says Ferris, were based on research by Galizia. Who wants to follow him, if he goes into the details, takes time.

The summary of the FIAU investigations goes like this: Cabinet chief Keith Schembri also used his mailbox company in Panama to hide 100,000 euros, which he received from the sale of three Maltese passports to Russians. He also paid half a million euros in bribes to a Maltese newspaper manager. Ferris believes that Schembri wanted to ensure that the government’s newspaper remains weighed. At the same time he wanted to make sure that the paper continues to receive her paper from him, because in the secondary occupation Schembri is also a paper wholesaler. And: Schembri and former Energy Minister Konrad Mizzi got bribes from Dubai from a company that trades liquefied gas in Malta. This money was also flowed to the letterbox companies of the two. Galizia’s last blog entry “Everywhere are crooks” referred to these businesses.

1.07 million euros for gas contracts?
Schembri and Mizzi deny everything. What leaves many in doubt about the rule of law in Malta: The reports of the FIAU were either not even sent to the police – or directly filed by the authorities – by the authorities. They had no consequences.

The reports involved either Ferris, his colleague Charles Cronin or the former FIAU boss Manfred Galdez. Nobody is in office anymore. Galdez went, supposedly on his own, in early retirement. On 16 June 2017, his successor Ferris and Cronin pressed a white envelope with their notice in the hand. “I never knew the reason,” says Ferris. Since then he could only fall asleep with pills. The FIAU tells the taz that it has “in its best interest to dismiss Ferris and Cronin for” performance reasons “.

If he had stayed with the FIAU, he would have followed the last great history of Galizia, says Ferris. It was about Michelle Muscat, the premier’s wife. The account of their company Egrant in Panama should have flowed from Azerbaijan to 1.07 million euros – justament after Malta and Azerbaijan had signed a contract for gas supplies with 18 years. “They wanted to prevent this investigation,” Ferris believes. He has sued the anti-corruption authority to reinstate him.

That the FIAU reports were even known, is due to a man who calls himself “the counterpart of Daphne in politics” and was their confidant. Simon Busuttil is a deputy of the conservative PN, the only opposition party; a man with the style and voice of a US television preacher, his temples mottled, black mourning lace on the lapel. “News only via WhatsApp,” he says. “My phone is being monitored.” Visitors are greeted in the Opposition’s conference room in the Houses of Parliament, an aquarium-like space that hovers over Valletta’s pedestrian street.

Retreat is no longer valid
As Galizia eradicated more and more material against the government, Prime Minister Muscat preferred the elections to last June. Busuttil was the top candidate of the opposition. Someone put the FIAU reports to him. Busuttil spread all the details with relish in front of the press. It did not help: the Maltese remained loyal to Muscat. Busuttil lost, which may have been due to the fact that Malta’s economy is booming. “After that, I wanted to slowly withdraw from politics,” he says. “But now, after her death, everything is different.”

In July, Busuttil has sued for the police to investigate the ministers. Schembri and Mizzi have filed an objection. “If I lose, I’ll go to Strasbourg,” says Busuttil. He wants to finish Galizia’s work.

The blogger has heavily attacked Muscat, the rest of the government, as well as large sections of the opposition. Part with “brilliant articles”, as even their worst enemies in the headquarters of the ruling party PL say. Partly with personal attacks and texts about her sexual life. But nobody in Malta seriously believes that it was corrupt politicians who stuck the bomb under her car.

The theory most commonly heard in Malta – and Italy – is that Galicia has stepped in the mafia’s quest to smuggle oil from Libya to southern Europe. This assumption is supported by the fact that in the past two years there have been five car bomb attacks in Malta whose victims are from the criminal milieu. No one was informed. Every time Semtex was used. This is produced, for example, in the Libyan Zuwara – where the smuggling oil comes from.

The opposition is not uninvolved
Nevertheless, many in Malta find Muscat to be responsible for Galicia’s death and to resign. Not so much because the police did not protect Galizia. In fact, the blogger has in the past rejected police protection because she feared that this would affect her work. Defending the allegation against Muscat, Galizia’s family, the opposition and Maltese journalists, MEP Busuttil states: “You can not do anything against corruption as long as corrupt ministers are allowed to remain in office.” In order to tolerate their business, the state is weakening Institutions – and thus tolerate the business of organized criminals.

However, the opposition is not uninvolved in the circumstances. Malta relies economically on extremely low corporate taxes, the online gambling industry and the sale of passports to wealthy foreigners. Busuttils PN contributes that. “Malta has sold its sovereignty to dirty money,” says Green Giegold. “It has replaced the rule of law with a culture of impunity and cronyism between political and financial elites.”

In the Casinostadt St. Julians in Malta stands the Mayfair complex, one of the many office buildings on the island,