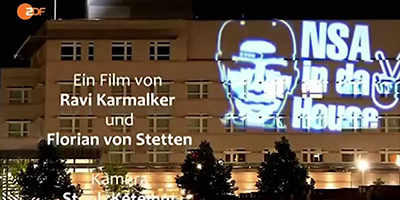 After 13 light projections and permanent pressure on the Meden the chief CIA man left Germany. NSA in da House or United Stasi of America, global coverage,
ZDF 37 ° on the cover story in the mirror (The Pact) was taken on our campaign respect.

To demonstrate against the spy of our data, has already made several times with pixels Helper with provocative light art actions for this matter carefully light and performance artist Oliver Bienkowski. Numerous media reported on it. Here is an overview of our videos. Press reports on this subject can be found on Google News. We maintain this in the coming days here.

Oliver shows in a TED Talk in the Lower transhipment sites, the projects with which he is employed: light art festival, activism, for example, Light cartoons against Saudi Arabia, the NSA, etc., and media hacking to bring visibility to homelessness and other issues that are ignored by the media. In a short documentary on ZDF 37 ° show the pixels Helper & Oliver, as he organized the light projection at the American Embassy in Berlin. From collection from his projector in a bunker in Dusseldorf, the meeting with the press, to the actual projection from the “NSA in da house” light art cartoon that must end with the arrival of the police. Pixel Helper at ARTE Tracks. Light projection on the Federal Intelligence Service, Berlin.Dieses short video shows a light attack, the Oliver has organized at the building of the Federal Intelligence Service in Berlin. The projection shows “BMW instead BND” to protest the monitoring methods that apply the secret services against the population.

[Ut_video_youtube url=”A2Yb3gWmm2I”] Pixel Helper with Kim Dotcom at the US Embassy. United Stasi of America. Published in Der Spiegel “DerPakt”. an action against the American Embassy in Berlin will be shown on this homemade video. lights on the wall: “United Stasi of America”, but only until the police arrive.

WDR in Current hour over pixels Helper, BND and NSA.In this extract from WDR Current hour from 15.07.2013 reported the journalist on the light projection of the “United Stasi of America” logo, the anonymous activists have organized the American consulate. double projection LIVE WDR Studio of Anke Engelke. This homemade video shows how the slides labeled “NSA in da house” installed and have been configured before the UN Building in Bonn and Vienna. light projecting US embassy Hamburg, pedal meets Polizeiboot.Das video shows Oliver and separate in a beautiful Austrian farm, by calling the Austrians, to protest the NSA in Vienna. After that, they are located in Hamburg before the US consulate, which they reached by boat. You configure an Austrian flag, where NSA is to the logo. The action ends like any other: with the police. Yes we scan! Schlag den Raab, ProSieben TV Prank.Das video explains how Oliver and his team have the body painted by a young to make a special offer at “Schlag den Raab” in Cologne. On the body of the slogan “Yes we spy” and Obama was painted face. The action was unfortunately immediately discovered by the security.

Our light projections attract international media attention and ensure that these important humanitarian issues are not forgotten. Please share our projects on Facebook! If you support our causes, we would be grateful for any donations, which allow us to continue our campaigns. Even a few euros makes a difference! Sharing is Caring. Please support our non-profit organization./strong>