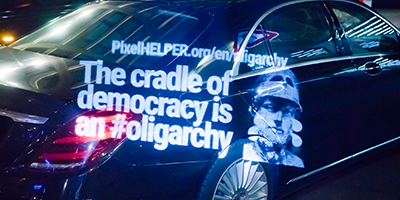 The cradle of democracy is an oligarchy

Despite the devastating economic recession, despite ‘reforms’, Greece is still firmly in the hand of the oligarchs. The politics of austerity are only enforcing this status quo, increasing the power of the few over the many. With the blessings of the troika, state assets are being privatized and sold off at fire sale prices to a handful of powerful clans.

Big Brother was always watching the citizens of Orwells 1984. On massive posters and telescreens, showing everyone who’s boss: a cruel, totalitarian state. The bosses of today, the one’s who run things, are significantly more insidious, low profile, hidden. We are PixelHELPER, and we came to Athens this February to simply shine a massive light on these forgotten faces. We are here to highlight the gross injustice against the Greek people. Orwellian projections at the “federal republic” of OPAP, Motor Oil Hellas and the Greek parliament, staged by PixelHELPER, serve to create a ripple effect in Greek and international media to bring the concealed power of the oligarchs to the fore. Our interventions focus on two central figures in the Greek power nexus.

Dimitris Melissanidis, nicknamed “Tiger”, together with a Czech consortium of investors, was able to buy the state-owned gambling monopoly OPAP for a fraction of its actual worth. The sale process of OPAP is not questioned by the Greek media, since it is considered that OPAP has one of the strongest, if not the strongest, media budgets [II1] in Greece, making its leverage inside mainstream Greek media seem limitless. Journalists that question Melissanidis’ power are intimidated and with even their lives threatened. 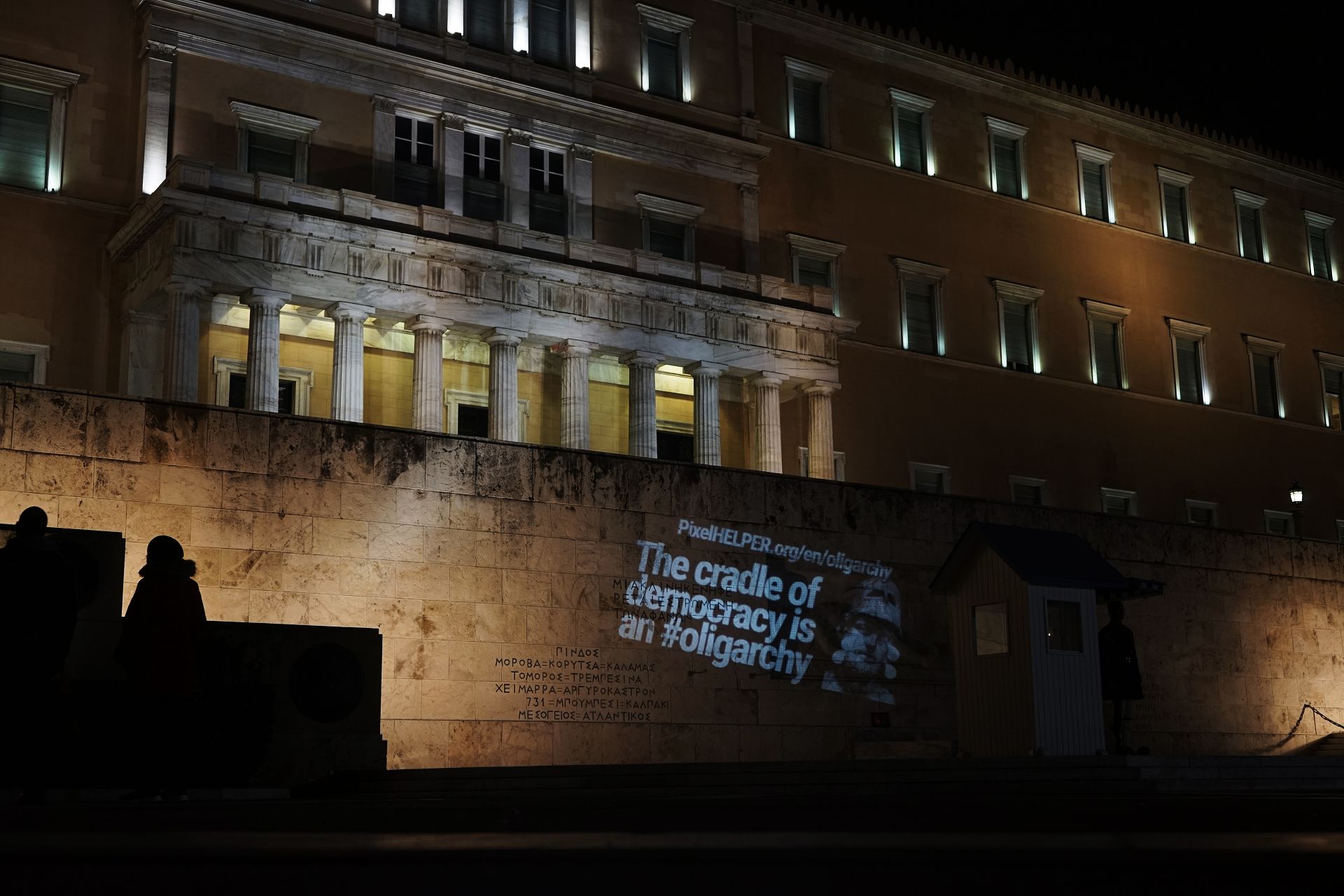 Vardis Vardinogiannis and his family are considered a “state within the state”. Reliable rumors have it that his oil companies are considered the main reason why the Greek islands still mostly run on dirty and expensive Diesel generators instead of clean renewable energy sources. The Vardinnogiannis’ clan power is not disputed in Greece, since they control important sections of the Greek media (two main TV channels), football teams and formerly the banking sector. 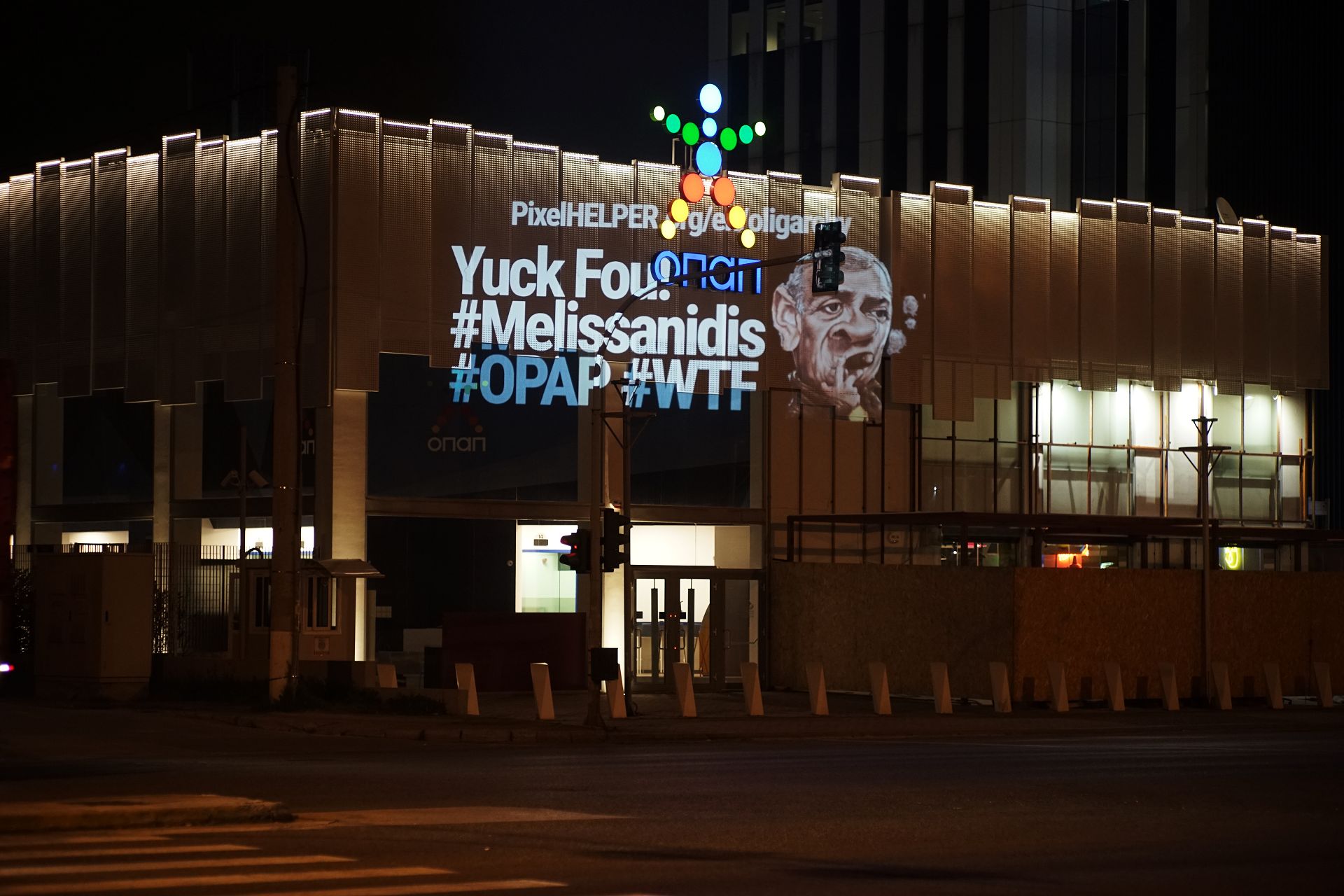 PixelHELPER demands that Greece returns to being a democracy. For this to happen we demand that current bribery practices of politicians are prevented by enforcing tight transparency laws regarding the financing of political parties and the personal finances of politicians. The Novartis scandal, which is currently unfolding and includes high-ranking politicians (including former Prime Minister Antonis Samaras), underlines how important this issue is. Unfortunately the transparency committee of the Greek parliament, headed by SYRIZA chairwoman Tasia Christodoulopoulou, continues to protect the interests of the politicians left and right. In a recently published report, the committee criticizes the political parties for their corrupt practices without actually naming specific examples and without pressing any charges (for more information see the following article). This is unacceptable and shows how corrupt practices by the political elite remain unpunished in Greece. 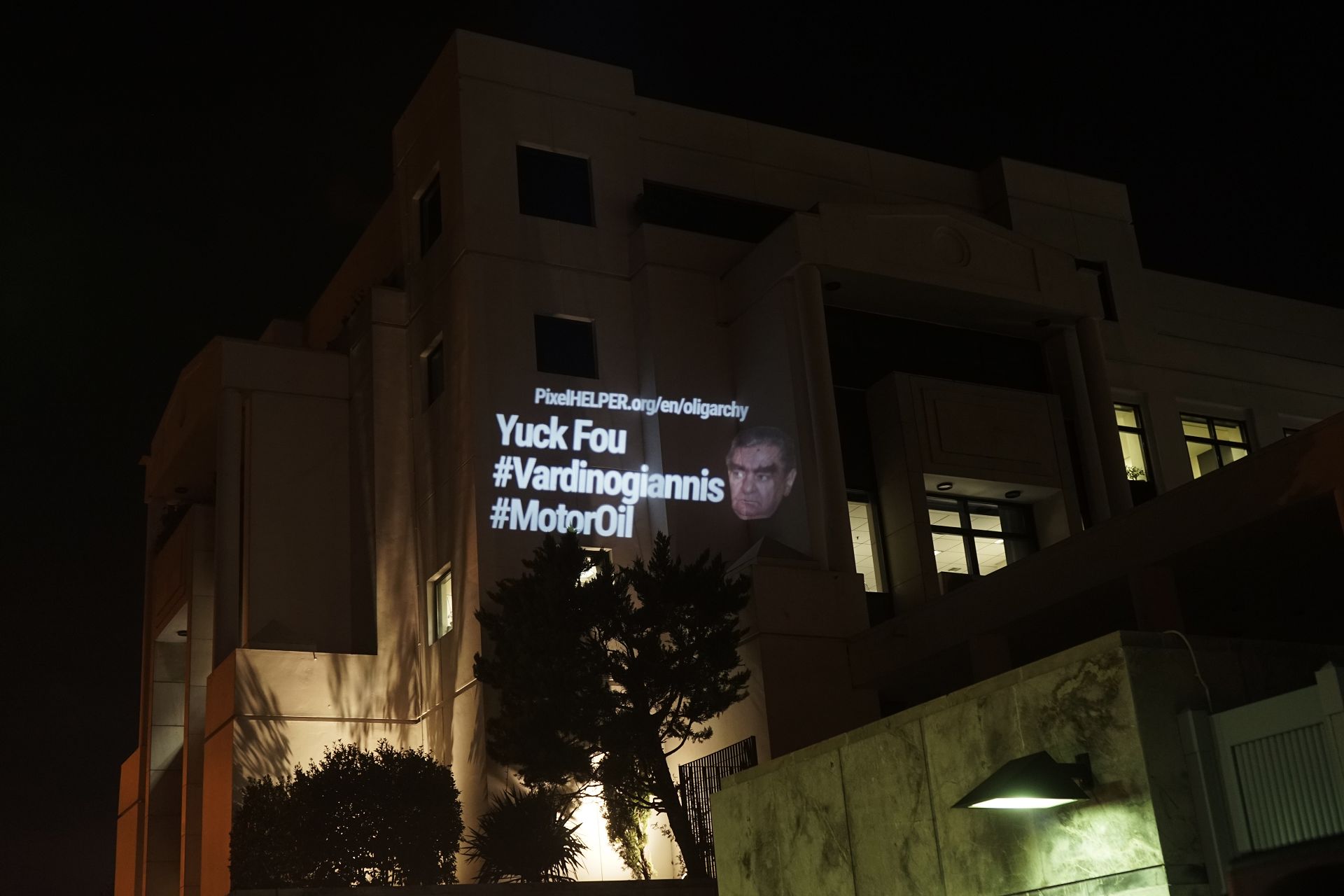 PixelHELPER also demands that the current privatizations be scrutinized and re-evaluated, to ensure at least a fair compensation for the Greek people. An independent inquiry should judge whether criminal offences have taken place and proceed with trials where appropriate. 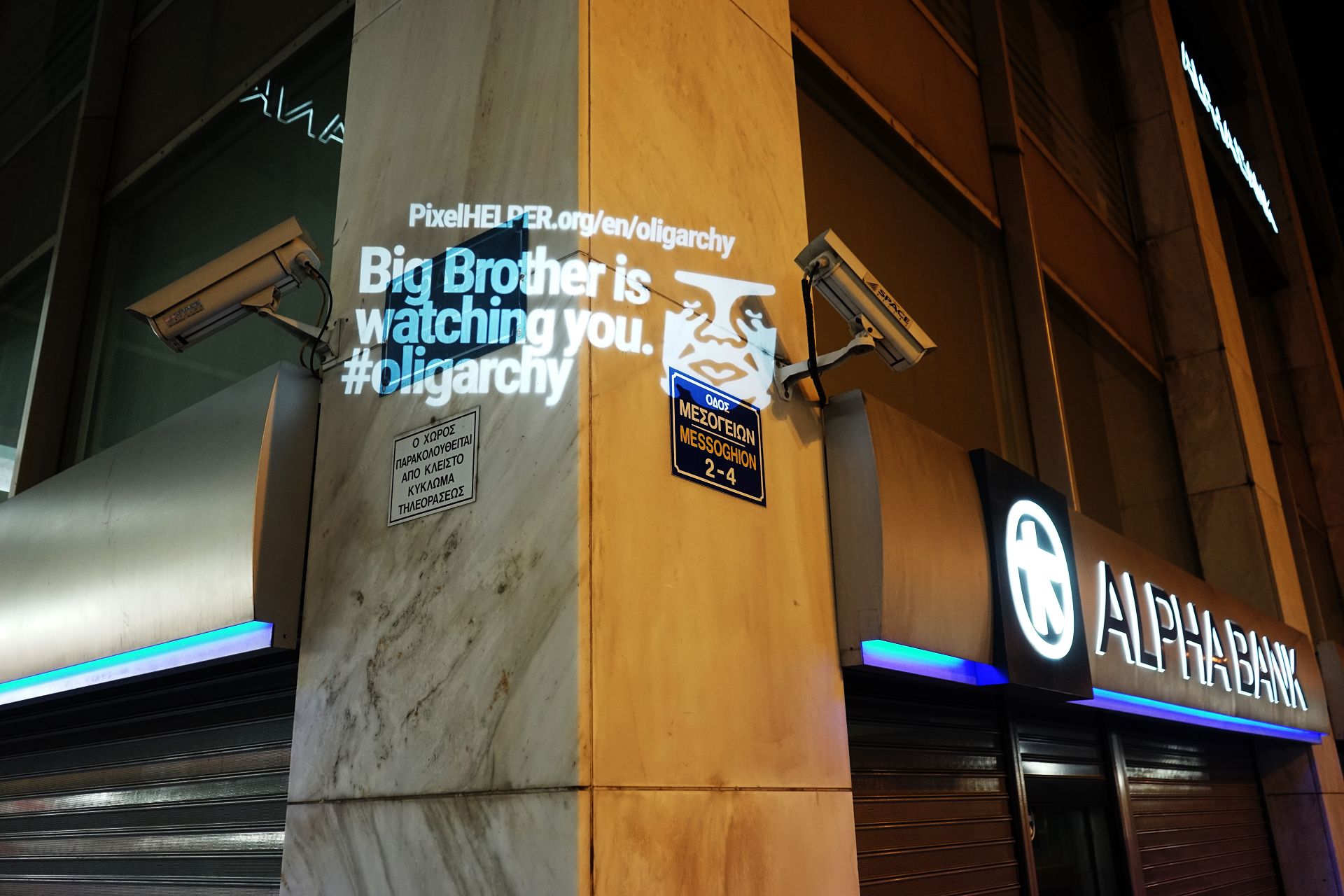 We stand in solidarity with the Greek people in their struggle against the oligarchs who are parasites inside a country that has more than a third of its people living in poverty. Plutocratic corruption must end now, or there will never be a chance for true recovery for Greece.

PixelHELPER Foundation is an international, nonprofit, artist collective & one of the most innovative political incubators of action art around. We see Art as something that must provoke and rebel, as a form of social self-assurance in the spirit of the Enlightenment. Our campaigns show the possibilities of art as the fifth power in a country. 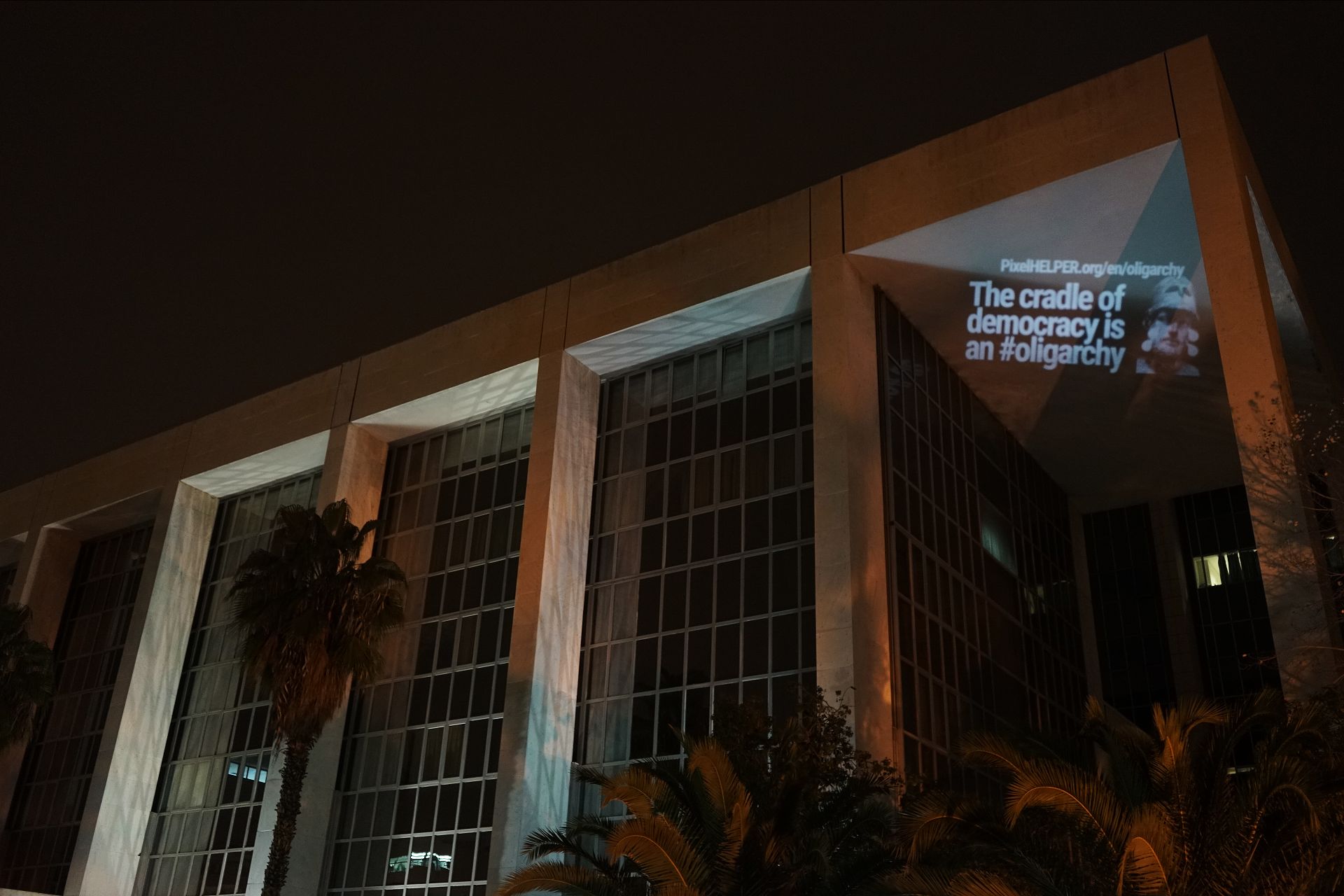 We need your help to continue our campaign in Greece. Donate via #Paypal: paypal@PixelHELPER.tv or https://PixelHELPER.org/de/Spenden 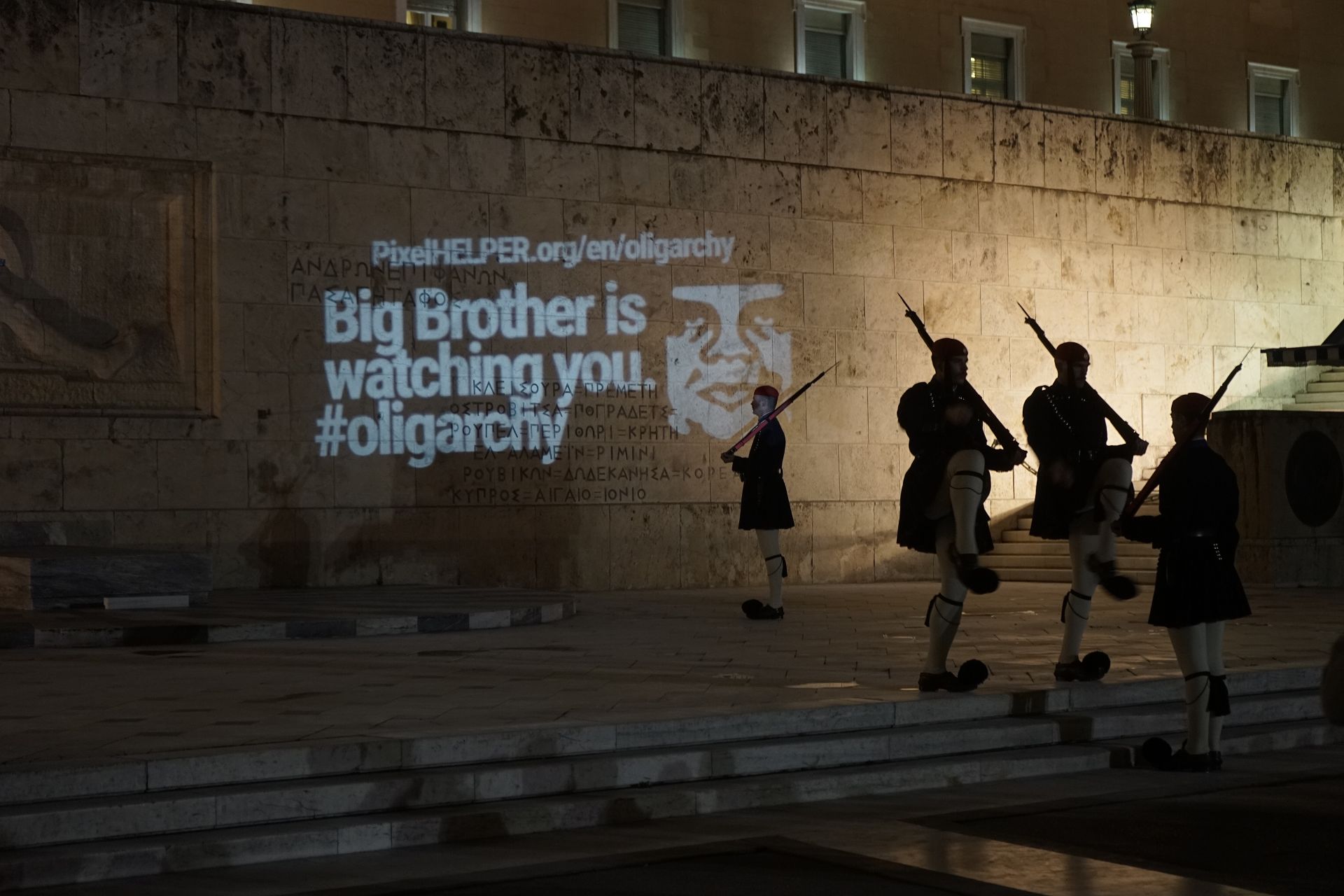 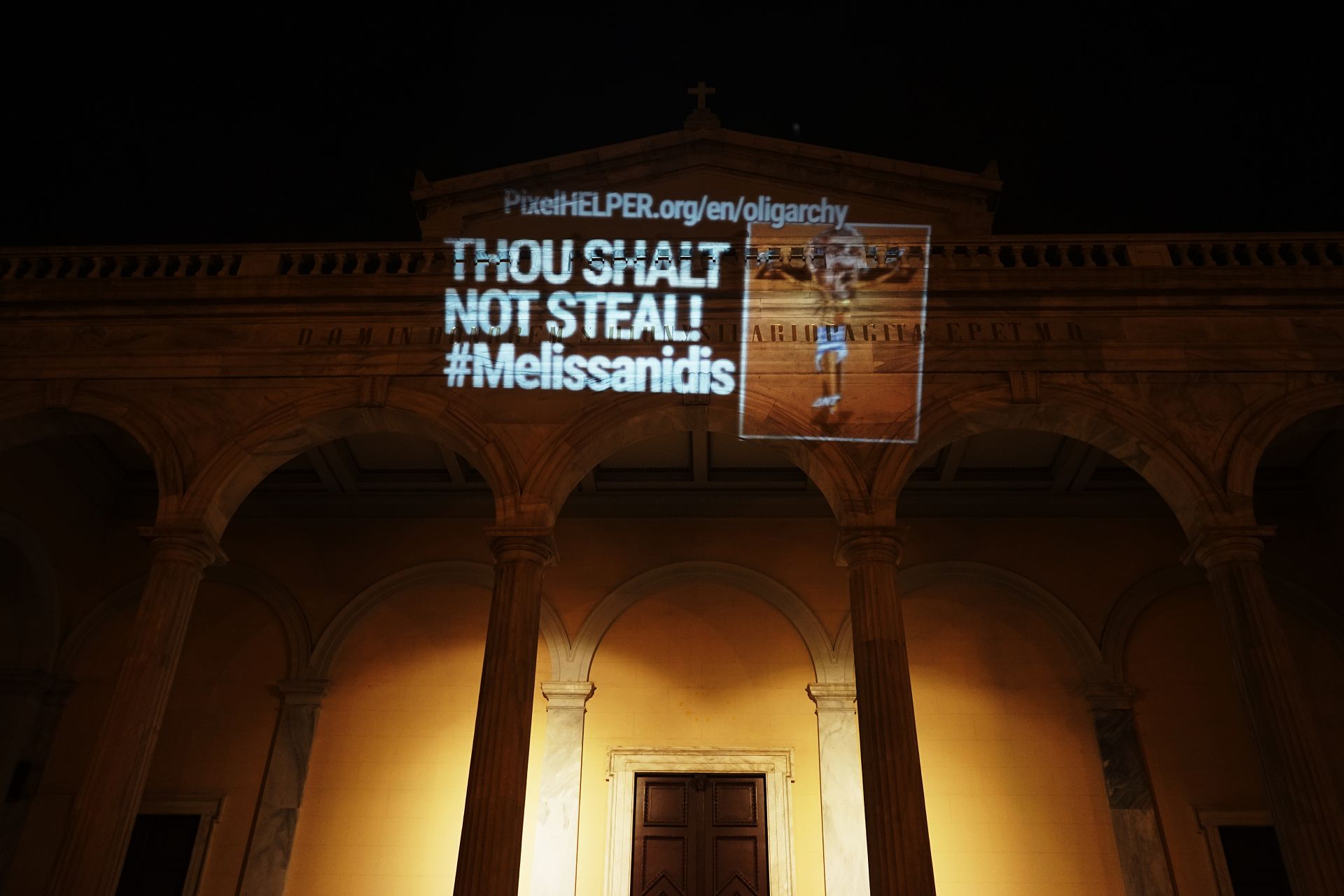