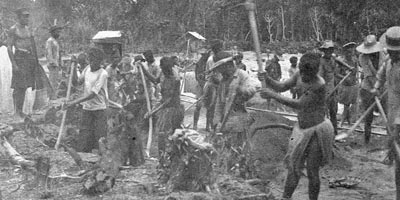 Do you know that the Germans stole the famous stone money from the island of Yap in Micronesia and have been storing it in the museum in Leipzig for 130 years.

That is why there is so much interest that the german federal government have to help and protect Micronesia against the rising tides. The industrialized nations are responsible for global warming and have to take care of Micronesia, as people there are already losing their islands to the ocean and have to be relocated. The six pieces of Rai Stone Money have this sizes: 1. 24 diameter 6.4 cm 2. 50 cm diameter thick 10.4 cm diameter 3. 48 diameter 10 cm thick 4. 4 diameter 5cm thick 5. 7 diameter 5 cm thick 6.30 diameter cm 5cm thick.

We want this stones back to micronesia, the museum can replace it with copies. Germany have a lot of Artefacts from a colonial expedition in 1907, lead by Victor Berg, the german vice Governor of the Area, he do a lot of damage in the World Heritage of Nan Madol & send hundreds of pieces from every island to the Leipzig Ethnographic Museum, where the artefacts still are till today.

The Shokeh on Pohnpei were forced to work by Germans. Now the time has come when Germany has to redeem its historical debt in order to get actively involved in Micronesia. PixelHELPER demand an official apology from the Federal Government of Germany and a visit from Angela Merkel to apologize to the descendants of the Shokehs for the forced labor cruelty.

We want to motivate German cities to enter into a city partnership with Pohnpei and to ensure lively student exchanges. Students will experience the effects of climate change and will have important experiences for their lives.

Together with German companies, we try to finance projects against climate change and to found our own green startups on the island to deepen German Micronesian relations.

The German South Seas, Germany bought #Micronesia in 1899 for the compensation of $ 4.5 million and incorporated the area into German New Guinea. If we can save Sylt, a rich Island in Germany from rising sea level, why not a former German colony too. Today the country is a victim of rising sea levels and resettlement is the result. Germany must live up to its historical responsibility. To date, Micronesia has no embassy in Morocco or Germany. Germany itself does not have an embassy in Micronesia either.

Whoever occupies a country and exploits it has to face the consequences a hundred years later. In addition to the genocide of the Herero and Nama, Germany still has a lot on the post-colonial score. Today the telephone directory in Micronesia is full of German names: Thieme, Stützner, Keil and others – descendants of German colonialists and local womens.

The german federal government must open an embassy and get more involved into the rescue of the Islands against the rising sea levels.In der deutschen Südsee,📷